So I was cruising Russell’s twitter feed looking for info about a possible engagement  (which is still not confirmed), when I came across this @CalvinKlein tweet about the Grammy’s tonight.

No offense to Calvin Klein, but I actually think he looks a little rumpled. His jacket looks too big and his pants seem untailored. Also he is sporting some serious scruff. I know the 5 o’clock shadow look is in, but it just seems too much to me. I think his ESPY look was much better. He does look a bit more polished when posing with Ciara: 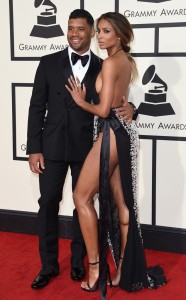 They also helped host LL Cool J’s Grammy party on February 13,2016. These pics below are from there. (Note: They say Feb 14th, but that is actually because it is slightly after midnight when they were posted.)

Dress #CharbelZoe. #Datenight With My Love @DangeRussWilson At His #Grammy Party With @LLCoolJ. pic.twitter.com/IE5LkwJgkk

Update 02/20/2016: As of 02/17/2016 there is still no engagement as Ciara spoke with E! News and waved away engagement rumors by showing her ringless finger. Watch the video of the interview here. It seems pretty clear to me that there isn’t any secrecy going on. Russell hasn’t asked her yet.

Seahawks Gossip features lifestyle articles about the Seattle Seahawks team and players. Find the latest news, rumor, and gossip.
Join in the Coversation!